What is the food pyramid?

The food pyramid is a guide that explains , the different types of foods that a person needs on a daily basis. divided into groups in a way that clarifies the required quantities from each group.
therefore it is divided in the form of a pyramid with a broad base, smaller the higher we go.
The food pyramid took its name from the shape of the pyramid-shaped design. in 1992 the US Department of Agriculture created the food guide pyramid, for the first time, and in 2005 it was replaced by an upgraded version called a pyramid.
it was published as a means that translates nutritional recommendations , into types and quantities of foods that people eat  every day.
The food pyramid consists of five groups that are divided and quantified for the person. according to the health status and what his body needs from it. these groups are divided in the form of a pyramid as follows.

The first group, “the top of the pyramid”:

2 – The second group of the food pyramid “group of milk and its derivatives”:

3- The third group of the food pyramid “proteins group”:

4- The fourth group of the food pyramid: vegetables and fruits group:

5- The fifth group of the food pyramid “is the base of the pyramid.”:

The required daily rations from the food pyramid 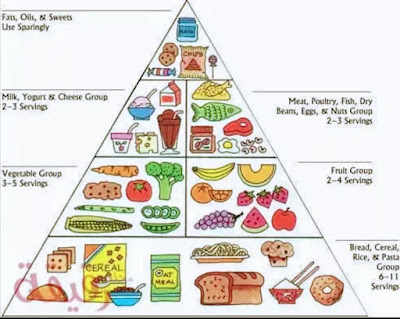 The food pyramid shows the five food groups, and these groups are arranged in the pyramid according to the size of the portions allocated to each of them  from the base to the top of the pyramid.
the group of grains occupies the base of the pyramid, and includes the different grains and their products. such as bread, pasta, and rice.
The recommended daily amount is 6-11 servings per day. “One portion”serving” is a slice of toast, a quarter of a loaf, half a cup of rice, pasta, or any other grains.”
Group of vegetables, 3-5 servings of vegetables are recommended. “One serving is a cup of raw vegetables or half a cup of cooked vegetables.”
Fruit Group A recommended 2-4 servings of fruits or their natural juices.  “One portion is a medium-sized fruit, half a cup of fruit pulp, or three-quarters of a cup of fruit juice.”
Group of milk and dairy products, It is recommended to have 2-3 servings of milk and dairy products, such as cheese and dairy.  “One serving is a cup of clamp, milk, or yogurt, half a cup of condensed milk, or one ounce of cheese.”
Meat group 2-3 portions are recommended from this group, which includes meat, eggs, chicken, and fish.  “One serving is 2-3 ounces of meat, a quarter of a chicken, one egg, half a cup of legumes, or a third of a cup of nuts.”
Group of oils and fats, You should reduce your intake of these substances as much as possible to avoid their harm.
Use vegetable oils and fish oils, and stay away from hard fats like butter, lard, and margarine.

What are the benefits of the food pyramid?

The food pyramid is characterized by several features that make it highly useful, namely:
1- Eat an appropriate amount of calories based on age, gender, height, weight, and level of physical activity.
2- Choose a variety of foods from all food groups when preparing a meal.
3- Knowing which foods and drinks contain less saturated fat, sodium, and added sugars.
4- Focus on eating whole fruits.
5- Diversification in the varieties of vegetables eaten.
6- It is considered a guide for individuals who want to lead a healthy and healthy life, there are many hierarchical schemes that suit the health status of each individual.
7- Work to reduce the risk of cancer and diabetes.
8- It contains all foods that contain vitamins, fats dissolved in water, minerals and antioxidants that protect against infections.
9- It protects the body from arterial and venous diseases.

What is the diet pyramid ?

The food pyramid diet is to follow a special program of foods that help lose weight very quickly.
as the food pyramid is a tool that helps you  towards eating a balanced. and nutritious diet while achieving a healthy weight.
The amount of food a person eats is related to the degree of activities that performs.  In adolescence and youth, the body needs enough nutrients to grow well.
when a teenager is very active, he needs additional nutrients to cover their activity level along with their growth.  Conversely, low-activity individuals need less nutrients to avoid gaining weight.
A balanced, complete, natural food is very important for health, growth, and raising the level of the person intellectually, mentally and psychologically.
so attention must be paid to nutrition from conception and a fetus until it ages and the person dies. because concern for the quality of food is a concern for human health and strength.
The best way to use the food pyramid is to determine your calorie needs by consulting a dietitian, who in turn will determine the daily rations that you should take from each group. and then you can use your food pyramid as you like.
As you climb to the top of the pyramid. the food groups become higher in energy density, as there are more calories in them. and for weight loss, you must limit the amounts you eat of these foods.
Vegetables and fruits are the basis of the pyramid. so you should pay attention to eating a lot of them, as these foods are low in energy density, and this means that you can eat a lot of them because they do not contain many calories.
Vegetables and fruits account for a third of the food pyramid. as they help a lot to protect humans from many diseases.
Vegetables are also rich in fiber, which helps a lot in losing weight in a healthy way without harm.
Carbohydrates provide the body with energy, so they represent the base of the food pyramid. and scientific research has confirmed , that carbohydrate foods prevent diabetes and aid in weight loss.

Some general tips for losing weight