Every breath we take allows us to move , talk and live , we take oxygen through our respiratory system naturally , and we do so without even thinking about it .

Where the respiratory system is an important organ , to maintain human health .

The main function of the respiratory system includes moving air in , and out of the lungs .  And protect the body from harmful particles that are inhaled .

Its most important function is the exchange of oxygen , and carbon dioxide .

It supplies cells with oxygen necessary for activities , and removes carbon dioxide .

The respiratory system provides oxygen to the human body , which is important for the life of cells , tissues , and is also used to remove toxic gases from the body ; Which is eliminated by breathing ” inhale and exhale ” .

As it consists of small branching tubes , these branches contain very small chambers .

The gas exchange takes place on the wall , as the respiratory system is made up of a group of organs that work together , to make the system function normally .

Now we will review , the main components of the respiratory system : 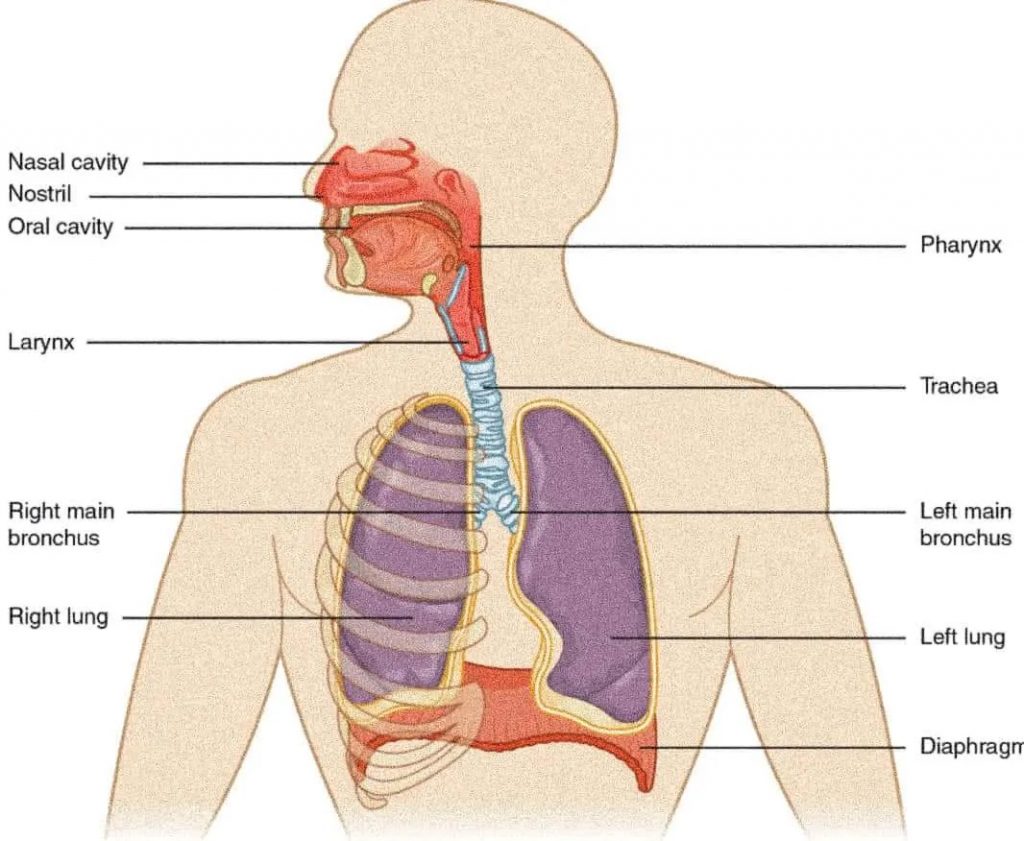 Perhaps the question now is why are three on the right side, and why two on the left?

Because there is a small cut in the lungs, and it is called a cardiac fissure, because our heart is sitting a little to the left, and we need to make room for the heart.

So there is a little less lung on the left side, and thus there is less space for the lobes, so there are only two lobes on this side.

The purpose of the respiratory system is to exchange oxygen and carbon dioxide, between the tiny alveoli and the blood.  Air enters through the nose or mouth, then reaches the trachea through the larynx.

The trachea divides into the left and right bronchi and reaches the lungs. The lungs expand and contract with the movement of the rib cage and diaphragm.

But during exhalation, the diaphragm muscles relax, the chest cavity decreases, and the air pressure in the lungs increases.  This leads to the flow of air from the lungs into the atmosphere.

The bronchi branch into a tree-like shape, and the tiniest branches are called bronchioles.  At the end of the bronchi are many tiny air sacs called alveoli, in which air and gases exchange with the blood through the alveolar walls.

Gas exchange occurs between the alveoli and the capillaries that surround them.  The alveoli are filled with air rich in oxygen and low in carbon dioxide.

The lungs are in direct and continuous contact with the external environment, in addition to increasing the number of potentially dangerous particles and gases.

The lungs are also exposed to many infectious organisms.  However, the lungs have defense mechanisms, and in most cases, these mechanisms can successfully protect them from negative external influences.

The moisture of all the breathing passages from the nose to the end of the bronchi is maintained by a layer of mucus, covering the entire surface.

In addition to keeping the surface moist, mucus can also trap a small amount of air and prevent most of it from reaching the socket.

Cilia are constantly moving and mucus moves slowly out of the lungs.  Then the mucus and particles on it are swallowed or coughed up.  This is called mucociliary clearance, and the respiratory system is protected by the immune system.

Some notes on the breathing process

1- It is extremely important to maintain a healthy weight exercise, and to avoid excess weight.  As the extra weight puts pressure on your lungs, it causes all of the respiratory muscles to work harder and less efficiently.

Drinking lots of water. Dehydration can thicken the mucous lining, become sticky and make you more vulnerable to disease.

Avoid smoking: due to smoking in oxidative stress inflammation, it causes cell death.  It can cause a whole host of diseases, including chronic bronchitis and lung cancer.

Learn to breathe yoga, learn how to breathe deeply to help your lungs function better over time, as it can increase your lung capacity.

Eat foods rich in vitamins, especially folate, vitamin B12, minerals and antioxidants, such as vegetables, fruits and nuts, that can help reduce inflammation and fight oxidative damage.

Reducing exposure to common allergens such as dust mites, pollen, and animal dander.

Maintain good hygiene, as viruses are transmitted due to poor hygiene and poor hand washing.

Regular aerobic activity can help the respiratory system more health, as it helps in improving air quality, and has a great impact on overall health. Remember that people are happy when they are in good health, so stay healthy.

3 thoughts on “human respiratory system and mechanics of breathing”